My 4-year-old can recognize letters when he's playing Letter Factory, but mixes them up at preschool and even on flashcards. Is this normal? How can I help him?

As the literacy development expert on LeapFrog’s Learning Team, Carolyn ensures that the curricular design in LeapFrog products is grounded in the latest educational research. Before joining LeapFrog, Carolyn was a reading professor at Sacramento State University, a curriculum developer for the Lawrence Hall of Science in Berkeley, and a teacher in the San Francisco bay area. She earned her doctorate in educational psychology at Michigan State University. 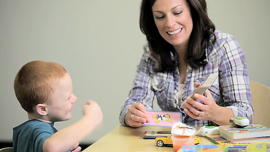 Knowledge of the alphabet at school entry is one of the best predictors of later reading achievement. This video gives you tips on making letter learning fun.
Reading & Writing