The truth of the Mozart effect (the theory that listening to classical music benefits children's mental development) is still a matter of debate. Regardless, exposing your child to classical music can be fun as well as educational. Prokofiev's Peter and the Wolf and Mozart's The Magic Flute are two examples of classical works that will spark a child's imagination. The wide range of instrumentation provides the opportunity to listen to and learn about instruments and the sounds they make.

As you listen to the music with your child, query her about what she hears: What instrument makes the crash of lightning in "Peter and the Wolf"? (Cymbals.) What does the sound of the drums represent in "Peter and the Wolf"? (Thunder.) What instruments do you hear when Papageno helps Prince Tamino escape the Queen of the Night in "The Magic Flute"?

Music, whether classical, jazz or pop, can enhance the learning process by promoting language development, creativity, coordination and social interaction. Check with your local orchestra or philharmonic for family friendly performances throughout the year.

Peter and the Wolf composed by Sergei Prokofiev, conducted by Kent Nagano, performed by the Lyon Opera Orchestra, and narrated by Patrick Stewart (Erato, 1994)

The Philharmonic Gets Dressed by Karla Kuskin (HarperTrophy. 1986)

The Story of the Incredible Orchestra: An Introduction to Musical Instruments and the Symphony Orchestra by Bruce Koscielniak (Houghton Mifflin, 2003)

Raise a virtuoso Set fledgling musicians in motion with these tips about when to start doing what.
Creativity & Life Skills 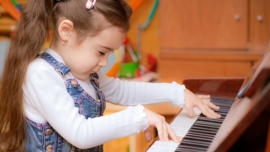 Discussion
Any advice on picking an instrument for my daughter? The piano and string instruments (such as a violin and guitar) are great choices because they give your child a solid foundation in reading music and music theory that will help with learning different instruments as she get older. Many string instruments also come in smaller sizes making them easier for young children to play. Larger ...
Creativity & Life Skills