Living on the edge: Young children at Halloween 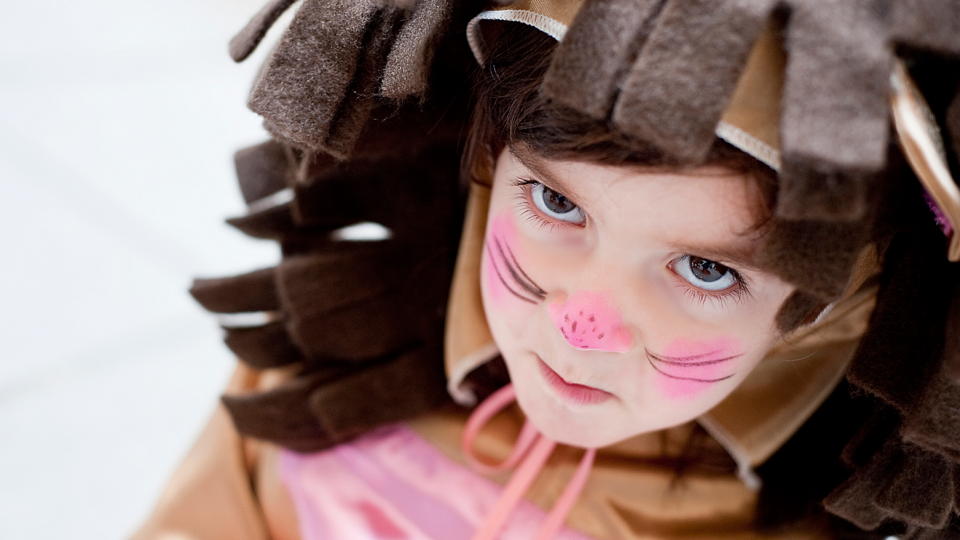 Some weeks back, Olivia Zoey, our 21 month old, started randomly muttering "…scary, scary…" under her breath several times a day, while stretching her arms and wobbling them around at the shoulder. Was she was suddenly in the market for some weird anxiety disorder? A few days later, mystery solved: as she and her mother bicycled past the local farm stand, now decked out with a spook-laden pumpkin patch, she practically launched herself out of her bike seat with excited recognition, pointing at, and now yelling at "Scary, Scary!" the stuffed scarecrow guarding the entrance to the market. We chuckled warmly at our little language-maven, but this story was not over. Just this week, our own stuffed "scary," who'd been sitting quietly on our stoop for days, required major repairs after an over-anxious attack by an upset OZ-baby, necessitating re-glued eyes, re-stuffing of most body parts, and a re-attached head.

Just a little too much?

Like most toddlers and preschoolers, she is telling us that Halloween as practiced in our current pop culture can, at first glance appear entertaining, but often turn out to be a bit much when one is little. Though parental explanations help, there is still a lot that is just too bizarre for even young elementary school children to feel okay about. True, many of our young seem quite fascinated by the masks, costumes, nighttime shenanigans, and cornucopia of typically forbidden junk, not to mention the scaries. Yet the fascination is less a sign of understanding than it is of developmentally appropriate fearful anticipation. Preschoolers are still working hard on the issue of what is real and what is pretend. Is that Uncle Greg under that oozing brain tissue, or not? That howling wolf IS hungry (for me?)—it's not just noise! Add a sugar high, darkness, insufficient sleep, and confusion to an already overloaded central switching station and you are headed for blackout real fast.

I adored Halloween as a school aged kid and its socially sanctioned one-night-only, pseudo-delinquencies. But I see a lot of overwhelmed preschoolers and kindergarteners, even a few first-graders staggering around our neighborhoods. Not to be a killjoy, but I think this spooky entertainment can be done better on behalf of our younger kids. Let's begin with what adults understand about their kids' emotional lives and their tolerance for fear, pretense, and the downright toxic.

"What Grown-Ups Understand About Child Development: A National Benchmark Survey," a highly significant poll released by the respected Zero to Three (where I served as president) and Civitas non-profits (and funded by Brio), showed that parents have important gaps in their knowledge about their kids' emotional lives. Most adults, for example, think that young kids are much less affected by TV, violence (domestic and social), family anxiety, stress, and depression than they actually are. I thoroughly understand the wish for us to think our children have more insulation around them, and that we adults have plenty of time to protect them, but the science is far from reassuring. They take it all in, including the nuttiness and frightening overstimulation that can be Halloween.

Here are some suggestions to make Halloween a more pleasant experience for younger kids:

Enchantment, the unexplained, the relationship between light and dark, fear and safety, life and death itself are the fascinating angles and horizons of the human condition and the childhood imagination. These elements are also the catalysts to creativity and curiosity. Yet balancing this stuff is hard for small ones, whether learning to ride bicycles or managing Halloween. They will enjoy the spooks a lot more later, if you help them now, with a firm hand on the seat and handlebars.