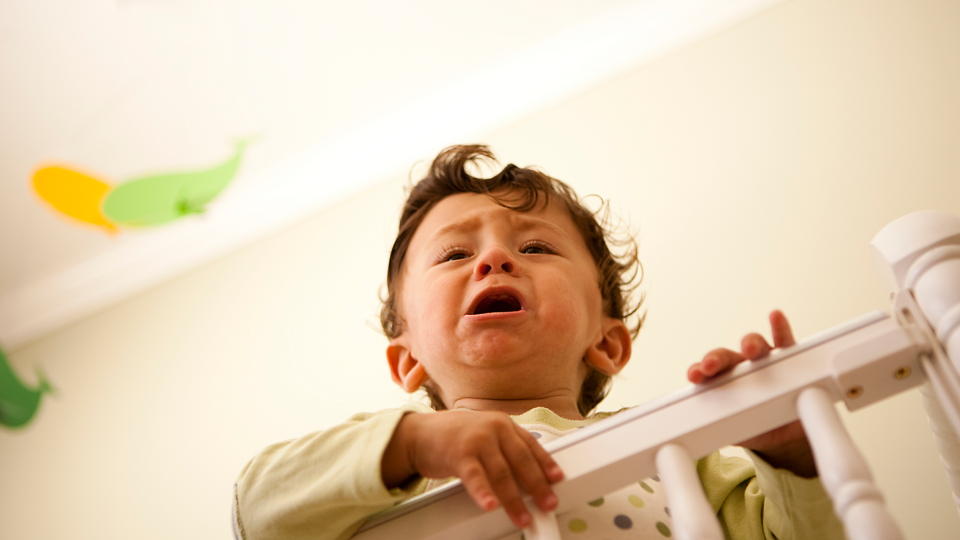 A new book by author Penelope Leach claims that leaving an infant to cry for extended period can cause brain damage. Advocates of sleep training argue that sleep is essential to brain development and familial sanity. Attachment parenting gurus believe responsive care to an infants needs, even at night, will build a child's confidence and self-esteem. So, what's the answer? Cry-it-Out, Controlled Crying, or Soothe to Sleep?

As always, I want to be upfront about my bias. I've have had two very active, spirited babies and we did not use Cry-It-Out with either of them. Even before I knew that my first had a heart condition and could not be left to cry, I was determined that I would work with her to comfort her to sleep. In my personal view, learning to sleep on your own is something that happens very gradually, in an age-appropriate way. Newborns wake for good reason, which is why sleep-suckling may help prevent SIDS. Older babies can gradually learn to sooth themselves back to sleep with parental help and examples.

I believe that a baby cries because he needs something—even if that something is only to know that the warmth, love, nourishment, and protection of the parent is near.

Cate Nelson at Eco-Child's Play also points to the primal connection between a crying baby and a responsive parent:

"If you’ve tried CIO and it’s made you uncomfortable, that’s because it’s supposed to. Instinctively, as a parent, you are supposed to respond to a baby’s cries. That’s why babies cry. That’s why my breasts swell when I hear an infant cry, even months after my toddler and I finished breastfeeding.

Although we have developed electric lights (so adults can stay up later), locks on doors (so we can feel safe), and baby monitors (so we can be in a separate room and still hear our babies), an infant does not understand that. That does not mean I rush to my baby at every whimper—or that I always give my toddler what he wants. It just means that I am there with him when he is upset to help him find ways to settle."

Carrie at Parenting Passageway has an anthropological take on the topic of infant sleep:

"My own thoughts on nighttime parenting generally run toward personal amusement as new parents repeatedly get asked the same question, 'Is the baby a good sleeper?'

What exactly does that term mean? What does the term 'good sleeper' mean to you? That they sleep 12 hours at 2 weeks of age? That you can shut the door and say, 'I am off-duty for 12 hours, see you when I open the door in the morning?'

Parenting does not work like that, does it? The suggestion is humorous, yet in American society, it is almost what people seem to expect. Immediate independence of the baby from the parents. Rugged solitary individualism."

Annie at PhD in Parenting shares 10 reasons Crying it Out is not for her family, including:

"Cry it out can make children insecure. Children whose caregivers are not consistently responsive and sensitive, often become insecure. Long-term studies have shown that secure individuals are more likely to be outgoing, popular, well-adjusted, compassionate, and altruistic. As adults, secure individuals are likely to be comfortable depending on others, can develop close attachments, and trust their partners."

Over on Babble's StrollerDerby, however, Sierra points to the damage a crying baby can do to a parent, and a marriage:

"After six years of attachment parenting, I’m starting to think a good night’s sleep might be worth a little baby brain damage. I can count on my fingers the number of nights of uninterrupted sleep I’ve had since I was pregnant with my first daughter. Who will be six next month."

The question is, though, does the science really back up Leach's conclusions (and my opinion)?
Leach's book may be new but her claim is not. The debate has been raging for decades and studies may be found to prove either side of the debate. None of the dozens of articles I read reference the specific studies Leach draws upon but she points to increased levels of cortisol, the stress hormone, produced when babies cry and no one responds. Those increased stress hormones are toxic, according to Leach.
In an article in the Guardian, however, Viv Groskop says that the studies that support Leach's claim involve Romanian orphanages, not ordinarily responsive parents using sleep training. She explains her own decision to use a controlled crying technique:

"They were dark times. Our first child, Will, was about three months old. After baby's bedtime, we parents would sit trembling, physically restraining each other, eyes fixed on a clock. After 10 minutes we were allowed to go in and pick up the crying baby. After four minutes—always four—one of us would crack. Simon: 'That's it. I'm going in.' Me: 'Oh no, you're not. If we're doing this, we're doing it properly. It says in the book...' Another blood-curdling scream. Me: 'I'm a bad mother. I'm going in.' Simon: 'Oh no, you're not.' Within three nights, the baby fell sound asleep immediately. Now aged six, he is not obviously brain-damaged."

Leach would respond that the child did not "learn to self-soothe" but rather gave up and "shut down" to conserve energy. Groskop says her child is not "brain-damaged" but can she say that with certainty that he has no ill effects from the extended crying alone? And what kind of "damage" are we talking about? BlueBirdMama comments in response to a post on The Faster Times:

"Can we just discuss for a minute the idea of damaging the brain? I don't think Leach is trying to imply that these babies end up with permanent cognitive damage for instance, or impaired ability to function in society. But perhaps the babies end up with a new set point in their brains where an elevated level of stress hormones like cortisol and adrenaline is their new normal. Then these babies grow up to have life-long issues with elevated stress-responses. This very thing has been documented in preemies who have very stressful early days including separation from their mothers and painful tests. All of this happens while a baby's brain is still developing and it definitely absolutely does shape the architecture of the brain. But this baby will grow up thinking it is normal (as you do), because it IS normal for them. But we also live in a culture where stress, anxiety and depression is normal. Who is to say what the root of that issue is?? I was also left to cry as a baby and I deal with depression and anxiety as an adult...is that because my brain is wired to 'need' elevated levels of stress hormones?? It could very well be.
And I refuse to risk passing that on to my own kids. Period."

Leach claims that she is not trying to attack individual parents but rather show them the science. However, regardless of my agreement with her opinion against Cry-It-Out, using inflammatory language just adds fuel to the mommy wars. It may sell books but will it help anyone sleep better at night?
How about you? Did you ever use "Cry-It-Out" or "Controlled Cry" techniques? Did you use "No Cry" methods? Are you happy with your choices?

Should I let my child cry it out?

Crying is a baby's way of communicating. Responding to your baby's cries builds trust and a sense of cause and effect. Responding to a baby's nighttime cries is an important part of parenting, but so is sleep. Parents should also keep in mind that "sleeping through the night" for an infant means a five-hour block of sleep, no...
Personal & Social Skills

Get the word from parents and pediatricians on both sides of the sleep training debate.
Personal & Social Skills

When should I start my baby on a naptime and bedtime routine?

One of the most difficult parts of parenthood is the lack of sleep! While babies are not likely to be receptive to any type of routine until they are at least 6-8 weeks of age, it is never too early to start a naptime and bedtime ritual. Doing so will calm your baby and help him understand that the bedroom is a place to sleep. Because ...
Personal & Social Skills