What do babies know about math? 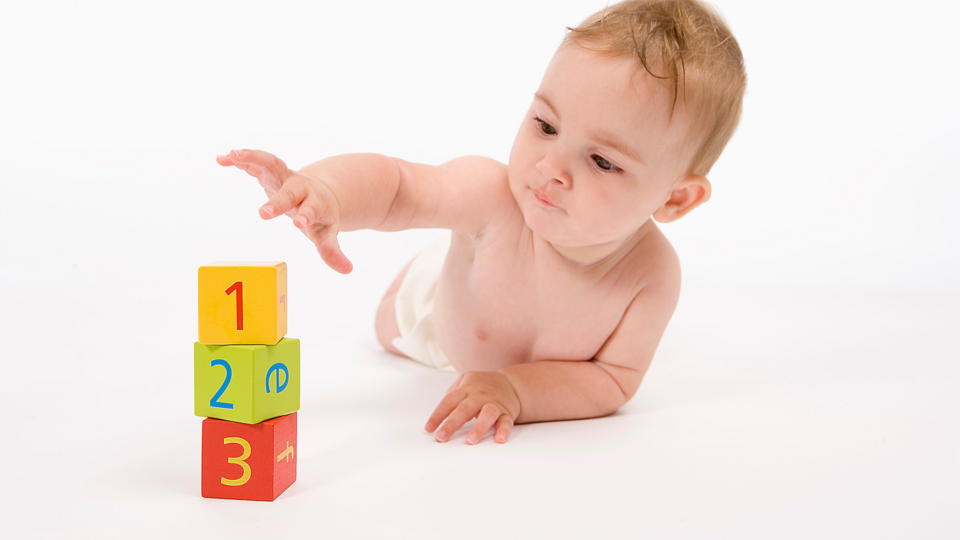 As a Senior Learning Designer for LeapFrog, Pamela applies her teaching and research experience to the design of engaging learning experiences for children of all ages. She taught ages 1 to 12 on three different continents and her research work examines learning through children’s media, toys, books, and parent education. She stays informed with the help of her two playful children. Pamela earned her doctorate in Education at the University of California, Davis.

Research suggests that humans notice representations of number as early as in infancy. There is evidence that babies as young as 6 months old can recognize the difference between sets of 2 objects and sets of 3 objects. In one study, 6- to 8-month-old infants looked at a series of photographs that all contained sets of three household items. Eventually, the infants lost interest in the photographs, but they became interested again when they were shown a photograph of only 2 items. This suggests that the infants recognized the change in quantity and demonstrated an abstract understanding of number.

Early addition and subtraction understanding also appears in infancy. In one study, 5-month old infants were shown two items in a display. The infants then watched as a screen came up to hide the two items from view. The infants watched as one item was added or removed from the set of items behind the screen. The researchers then removed the screen to reveal a “correct” set of items (e.g., 3 items if there were 2 items and then 1 item was added), or an “incorrect” set of items (e.g., only 2 items if there were 2 items and then 1 item was added). Infants as young as 5 months old were surprised if the quantity of the items did not match their expectations. This suggests that infants have an early understanding of adding and subtracting small quantities of items from a visual array. Parents can build on their children’s early understanding of numbers by talking about quantities and giving language to these early understandings about numbers. This can be as simple as modeling how to count items to determine how many items are in a set. Children can then learn to recognize and use language to describe instances of quantities and numbers in the world around them.