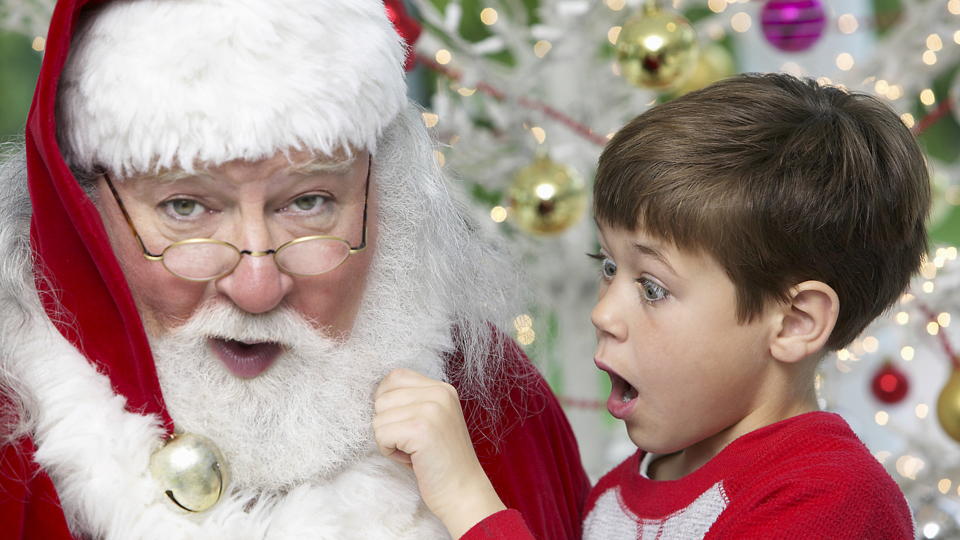 Melinda Lilly is a children's book writer who lives with her husband and son, Henry, in Los Angeles. She believes in the spirit of Santa Claus.

"Mom, does Santa really bring the gifts or is it you and Dad?" Henry asked one afternoon at home, looking at me with the piercing gaze of a lie detector expert.

"How did that come up?" I asked as nonchalantly as a panicked mother could. It was the middle of summer, he was seven years old, and I was not prepared for this! Ask me how fireflies light up, ask me why I wear socks that play "Jingle Bells" every time I knock my ankles together, ask me anything but the Santa question!

"I've been wondering…so is it really you and Dad?" he continued.

He waited for another answer, the light from his eyes like two interrogation lamps.

"You really want to know?"

"No! That's the wrong answer!" he sobbed, running away from me to his bedroom.

He crumpled onto his bed and I hugged him, saying, "When we give each other presents signed as Santa, it's because his spirit is inside us."

"But then Santa isn't real!" he cried.

Then I told him about December 20, 1996. On that day I was staring at my computer screen when a friend from a nearby office burst into the room. "Look!" she said, spinning my chair around to face the window. I gasped. In a moment my co-workers—urbanites in sleek black suits—joined us in gazing outside, eyes wide. Santa's sleigh was flying over Los Angeles. We all knew it was ridiculous (as the best magic sometimes is), but also knew it was definitely there, traveling at a leisurely pace away from us and toward the mountains. We smiled together, watching the top of Santa's red cap, the glimpse of snowy hair, the brown and black sleigh, until they were too far away to see.

I turned back to Henry. "We all believed we'd seen the real Santa, though people who didn't see the sleigh have told me it must've been a hot-air balloon with a motor, a low-flying plane, or an advertising stunt of some kind. I don't think so."

"Me either," he said, though his face looked unsure.

My friend Jayne says that when there is something you really want, Santa will bring it to you. That Christmas, what Henry wanted even more than a toy robot was a Santa who was real. "Let's make chocolate chip cookies," he said nervously on Christmas Eve. "I think they're Santa's favorites."

Before he went to bed he set a plate of cookies, a glass of milk, and a red napkin on the cabinet near the fireplace. The next morning at 5:30, he raced into the living room and went straight to the cookie plate, now covered with crumbs. "He came!" he cried, wrapping his arms around his dad and me in a hug big enough for Santa.

May your holidays be filled with magic!