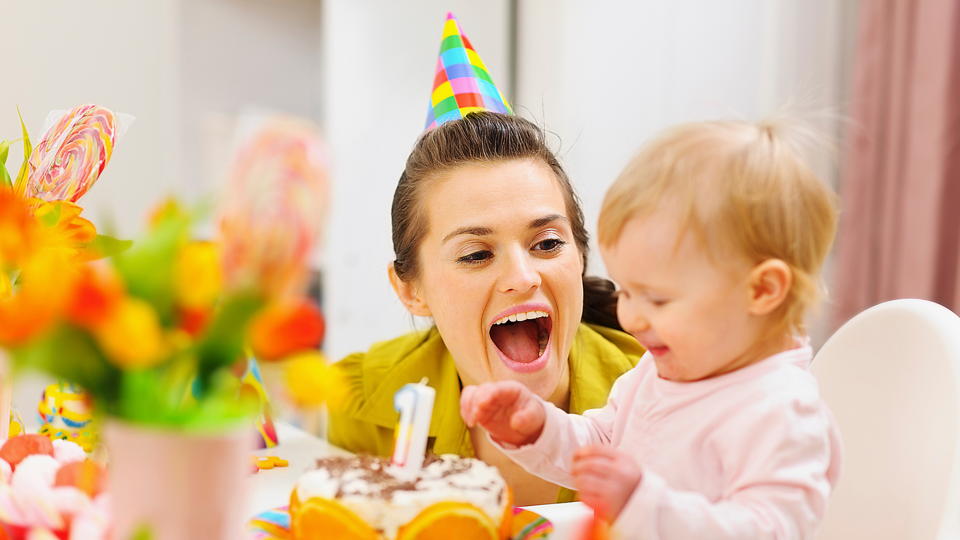 We've been attending a lot of birthday parties for toddlers and preschoolers lately, and it is interesting to see all the different styles of celebration. Do you go all out on your kids' birthday parties or do you keep it mellow until they are old enough to be part of the planning?

Too pooped to party?

When I was sixteen I worked as an entertainer at children's parties, dressing up as Disney Princesses, Power Rangers, and even Barney, twisting balloon animals and painting faces.

More often than not, the little guest of honor was either still napping when I arrived or ran in terror from the costumed characters.

For the one- and two-year-olds, birthday parties are more of an opportunity for the family to come together and celebrate.

For me, a lot of the stress around birthday parties revolves around gifts. I know that some people enjoy selecting just the right present for their favorite tyke, and others will feel obligated no matter what the parents say—but I wish there were a way to avoid all the gifts for very young kids without hurting anyone's feelings.

After all, we could wrap up a bunch of the toys from the bottom of the toy box and, under three, the kids probably would think they were brand-new gifts! For my daughter's first birthday, we asked our guests to donate to a charity. Many did...but then they also brought toys!

When we're going to a friend's party, my top gifts to give at a first birthday party are puzzles, craft supplies and books—parents appreciate the educational value and kids love them! I have yet to find a toddler who doesn't think the Tag Junior is a fun way to read.

Since my son and daughter were born in August, we combine their birthdays—which is not so easy when my four-year-old daughter requests a "hot pink fairy party."

My two-year-old son, on the other hand, doesn't know a birthday party from a day at the park, but if he had a choice, would probably prefer race cars, construction vehicles, or puppy dogs as a theme.

My solution was a fairy tale party with fairies and dragons. I spent two weeks convincing my poor baby that he loves dragons, reading him book after book about the mythical creatures. It worked—after we "slayed" the dragon piñata, he dragged it around the yard, hugging his new friend.

Our parties are not the most elaborate affairs but at times I do go overboard in the planning. After all, most kids won't have any memory of their first, second, or third birthday party. My toddler son probably wouldn't care if we had just gone with a hot pink fairy theme for his party. He was too busy playing with the new firetruck Great-Papa bought him and wondering why our yard was so filled with people.

Somewhere between slapping a candle on a junior mint and calling it a day and a carefully orchestrated extravaganza of catered food, hired entertainment, and too many gifts to even fit in the playroom, there must be a happy medium.

If throwing giant birthdaypalooza is your delight, then you shouldn't be embarrassed to indulge in some world-class party-planning. On the other hand, if the sight of matching streamers gives you hives, feel free to order a pizza or throw a potluck.